Unique handmade functional pottery, together with weaving, quilting and other fibre arts.

I first dabbled in clay while in high school in the mid 60's, but it wasn't until 1995 that I began to work seriously in this medium. It was after I bought an old kick wheel and some clay in the spring of 1995 and felt the clay change almost magically in my hands as I applied pressure to it, that I was really hooked on clay. My wife and I both took a beginners pottery course in Kamloops, British Columbia, in the fall of 1995. Within a few weeks I was producing a lot of different pots and before I knew it I was selling them in the fall craft sales. I took more courses, bought an electric wheel, a small kiln, some tools and clay, made a studio in the basement, and got into production. I have attended many workshops over the last 27 years. Each one has had an influence on the unique style of pottery I have developed.

In Nov. 2002 I took early retirement to pursue pottery full time. In 2004 we moved to Vancouver Island (British Columbia, Canada) and are presently in Nanoose Bay, BC. I make mostly functional pottery using rich vibrant colours and bold flowing forms and I strive to make each piece function well for its intended purpose whilst being visually pleasing. My work is evolving: forever being refined and changed with the influence of each workshop I attend and input from customers and friends.

My goal is to make each pot unique.....similar but not identical. Each piece is either thrown on the wheel or handcrafted from slabs of clay. All pots should be oven, microwave and dishwasher safe because of the temperature they are fired to but it is not recommended that they be used for making candy or toffee. My glazes are food safe and lead free.

As of January 2017, due to a few family circumstances, it was time to slow down a bit, so I have removed my pottery from all the stores I was involved in but you can still buy it from my Studio – Knut Pottery Plus – in Nanoose Bay, open Monday to Saturday 10am to 5 pm year round or phone for an appointment – 250-468-7633. If you phone or email (al@knutpottery.com) we can always put aside pieces until you can pick them up.

Click on an image to display a larger version,
then use slideshow controls at the top of the page.
« Back to list page

Thank you for your generous support! 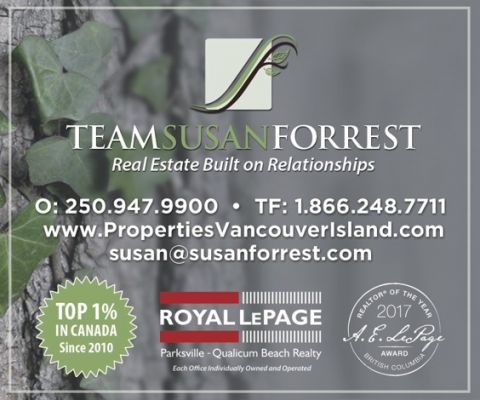 Thank you for your generous support!

Team Susan Forrest
Back to Top